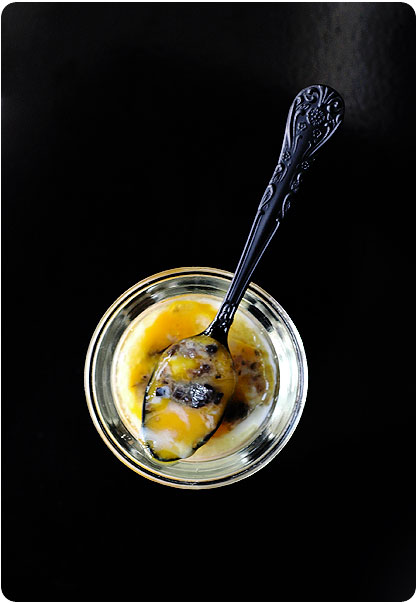 When I was a kid, if I had had my way, I would have eaten eggs for breakfast every day. My mother, however, believed that too many eggs was bad for a growing child. Given that she had a medical degree, and I was just a pint-sized glutton, who was I to argue? These days (thank the food gods), the idea that an egg a day leads to dangerously high cholesterol levels has been pretty much proven to be the myth that I always believed it was. Now, I can happily have eggs — soft-boiled, sunny-side up, scrambled, poached, baked, or even steamed in a custard — on any day of the week without fear. And at any time of the day. I could eat eggs for breakfast, lunch or dinner (although I will admit I wouldn’t have them for all 3 meals in the same day — even for me, that would be a tad excessive).

I always enjoy ordering an interesting egg dish for lunch or dinner when dining out. One of the best I have ever had is Joel Robuchon’s egg cocotte topped with a foamed mushroom cream and served over a parsely puree. A staple at Robuchon’s many Ateliers, this fabulous little dish is elegantly served in a martini glass. Judging by the number of both traditional journalists and food bloggers who have raved about this dish, in print and online, I guess I’m not alone. For those of you who have yet to try this little taste of heaven, the egg is slow-cooked at a low temperature so that while the egg is indeed cooked, the white is just barely set and the yolk is runny. For years, I’ve wondered exactly what temperature and what techniques Monsieur Robuchon uses.

Recently, I’ve had the good fortune to meet not one but two chefs who have worked for Robuchon. Of course, I had to ask. While both chefs did agree on a few things (namely to cook the egg in whatever glass container you were going to serce it in and to put cling film over the top of the glass before cooking), unfortunately (and maddeningly) the cooking temperatures and times that I was told were different. One chef told me to cook the egg for 32 minutes at 58 degrees Celcius and then hold it indefinitely at 67 degrees Celsius until ready to serve. The other (whom I have to admit I kind of trust a little more) said to just cook it at 68 degrees Celsius at 25 minutes. He didn’t mention anything about holding it but I’m assuming you would hold it at a slightly lower temperature. A little Googling also resulted in one food blogger stating that to make this dish, you would cook the eggs at 64.5 degrees Celcius for 45 minutes. What’s also not mentioned is whether these are baked in the oven or cooked in a combi-steam oven. Another article I had read said that Chef Robuchon steamed his egg cocotte so I’ve taken that to mean that they were cooked in a combi-steam oven, i.e. an oven in which you can inject specific amounts of steam/humidity. 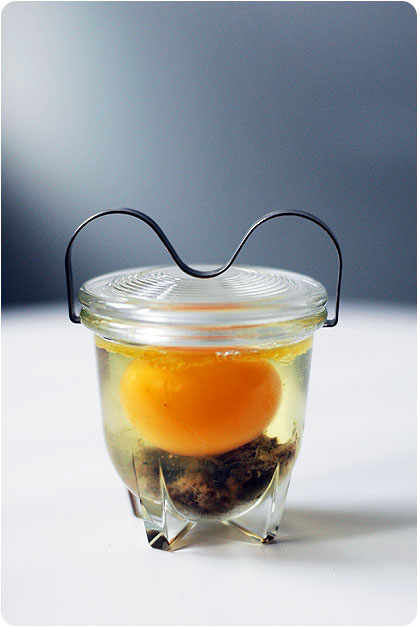 Fortunately, S and I have one. A domestic version nonetheless, but the Miele combi-steam oven is pretty darned amazing and fantastically accurate. Over the last few days, I’ve been experimenting with the oven in order to establish what cooking temperature and timing, and what holding temperature works for me.

At 58 degrees C with the combi set to 20% humidity, the egg never looked cooked, i.e. the whites remained transluscent. But when I held it at 67 degrees C, the whites started to set, turning… well, white. But when held too long, the egg yolk hardened. I had read in Harold McGee’s seminal On Food and Cooking that egg white begins to set at 63 degrees C while egg yolk begins to set at 65 degrees C. So, I tried cooking the egg at 64 degrees C, hoping for semi-set whites and runny yolk. But after 40 minutes, the textures still weren’t what I wanted. I then tried cooking the egg at 68 degrees for 25 minutes, also at 20% humidity. The results were good but not great. The whites weren’t perfect. I increased the time to 30 minutes and got better results. I then tried holding the egg at 64 degrees C. I figured if I held it at this temperature, the yolk wouldn’t harden. That worked when holding for 20-30 minutes; in fact, the texture was really nice. But when holding for more than that, the yolk started to harden. I then decided to hold the egg at a temperature below 63 degrees C, which seems to be working pretty well. Of course, not all ovens are the same, so please don’t take my word that these temperatures and times will work for you on your own equipment. Do what I did and test your oven. If you don’t have a combi-steam oven, you can bake your eggs in a water bath or in a traditional steamer — although the timings and temperatures for these are again completely different.

For these experiments, I’ve cooked the egg with just a touch of Tetsuya Wakuda’s Truffle Salsa. I should also say I was working with room temperature eggs.

Now that I’ve (kind of) figured this out, I’m going to start experimenting with different sauces and other items to mix with the egg. I’ve made an oxtail ragu which should work well. I’ll also try Chef Robuchon’s traditional parsley puree and mushroom cream. Speaking of Robuchon’s original egg dish, for those of you without a combi-steam oven, I’ve found a recipe for the dish in which you can cook the eggs through a simple stove-top steaming technique. I’ve reproduced it below for your pleasure.

In a medium saucepan of boiling water, blanch the parsley leaves until tender but still bright green, about 3 minutes. Drain well. Transfer the parsley to a food processor and puree. Scrape the puree into a bowl. Clean out the food processor.

Add the white mushrooms to the food processor and pulse to mince. In a large nonstick skillet, heat the oil. Add the minced mushrooms, season with salt and pepper and cook over high heat until the liquid has evaporated, about 5 minutes. Add the water and stir to scrape up any browned bits. Add the cream, cover and simmer over low heat for 10 minutes. Strain the mushroom cream through a fine strainer into a small saucepan, pressing on the solids. Simmer the cream over moderately high heat until reduced to 1/3 cup, about 2 minutes. Season with salt.

Set a round rack in a large, wide pot. Add enough water to reach just under the rack without touching it. Cover the pot and bring the water to a boil. Butter four 1 1/4-cup heatproof porcelain bowls, about 4 1/2 inches wide at the top tapering down to 2 inches wide at the bottom. Alternatively, use ramekins. Spoon the parsley puree into the bowls. Crack 1 egg into one of the porcelain bowls; season with salt and pepper. Repeat with the remaining eggs. Cover each bowl with plastic wrap. Carefully set on the rack in the pot, cover and steam over low heat until the whites are firm and the yolks are runny, about 12 minutes. Discard the plastic wrap.

Reheat the mushroom cream and chanterelles. Spoon the cream over the eggs, top with the chanterelles and serve.

The recipe can be prepared through Step 3 one day ahead. Refrigerate the parsley puree, mushroom cream and chanterelles separately. Reheat gently.