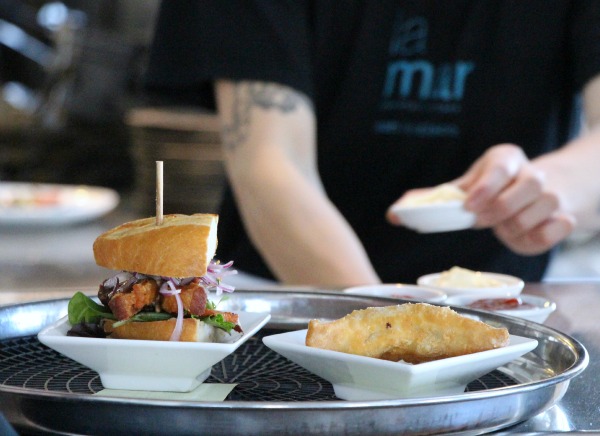 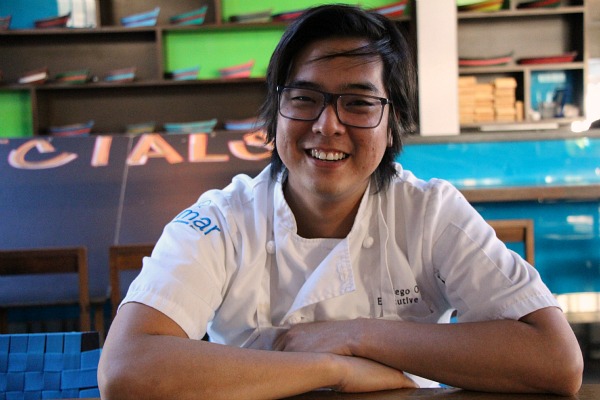 Diego Oka is a chef who started his culinary career with direction at a young age, but his trajectory as a chef has been quite different compared to most.  He quickly skyrocketed to roles of high responsibility, travelling the world, managing restaurants in North and South America from the young age of twenty-one.  Diego studied hospitality while working in one of Lima’s oldest traditional Japanese restaurants, Ichiban, where he spent three years learning all the essentials, from dishwasher to working behind the sushi bar.

One day while out shopping, Diego spotted Gaston Acurio, his culinary idol, in the aisle of a supermarket.  He took the opportunity to introduce himself, and that gutsy move scored him an apprenticeship in Acurio’s fine dining restaurant, Astrid y Gaston.  It didn’t take long for Acurio to realise Diego’s potential, and in less than two years, Chef Oka was leading the team at the new project, La Mar Cebicheria, the restaurant that would become Gaston Acurio’s flagship concept and international export.

After a year in Lima, Diego was sent to Mexico City to open Gaston Acurio’s first international cebicheria.  Three years later, he went to Bogota to open Colombia’s La Mar.  Now, as executive chef of La Mar in San Francisco, Diego Oka is turning things around in the Bay Area, having revamped the team, refreshed the menu, and energised the space, which is becoming increasingly popular with the locals, and stays busy from lunch through to happy hour and dinner.  Diego successfully manages over 500 staff in three different cities, with the highly anticipated opening of T’anta (by Gaston Acurio) in Chicago next month.

Diego is a chef unknown to many, yet his story should be shared and known by all.  He has been at the forefront of the expansion of Gaston Acurio’s growing Peruvian food empire.  Diego has been the silent force hand behind all the successful kitchens he’s been involved with. His youthful energy, good nature, and incredible work ethic make Chef Oka a star representative of Peruvian cuisine.

What has been the biggest reward, so far, of your experience as an international Peruvian chef?
The best experience of being part of the La Mar team has been the opportunity to submerge myself in different cultures.

What was it like moving to Mexico City to open La Mar Cebicheria from scratch?
Mexico is a part of me. I think I may be part Mexican, really.  It was the best experience for me.  I was thrown into the deep end, had to source produce, measure the different local ingredients to the things I was used to cooking with in Peru, hire staff, and I had a blast doing all that.  The restaurant was a success and the locals were incredibly warm and welcoming.  Bogota was just a step up from Mexico.  I had international experience and was more confident, and the Colombian people are amazing.  Warm people, warm team.

Where do you want to see Peruvian cuisine?
I hope to see it everywhere.  I’m excited that there are more restaurants opening in cities that wouldn’t have been an obvious choice before.  Under Gaston Acurio, I’m leading the project of the new T’anta in Chicago.  The concept is great: a tapas approach to tasting all of Peru’s food region by region.

Will there be a Bistro Oka sometime soon? And if so, will it be Nikkei? (Peruvian Japanese)
I embrace my Japanese heritage, but I don’t want that to define me.  Perhaps in four or five years I’ll be aiming to start a project of my own, but it won’t be Peruvian-Japanese.  I very much respect the work of Virigiolio Martinez and Pedro Miguel Schiaffino.  Hopefully I’ll find my own way and start creating my own type of cuisine.  Personally, I feel every chef should undergo Japanese technique.  It’s a must.  Working at Ichiban in Lima when I just started my career was crucial for my endurance in the kitchen.  Japanese precision is the best for honing technique.

Kitchen nightmare story?
It hasn’t happened, but I’ve lost sleep thinking that I might have a full house with no staff showing up at work that day.  Death by lack of employees.

Celebrity dinner guest?
My parents!  Although it would take a fair bit of energy to keep my father away from the kitchen.  We’re a household of true foodies.

Final Meal?
One cooked by my grandma.  She’s the best cook I know.  She’s also the reason I decided to get into the kitchen in the first place.  My parents’ house is like a restaurant.  My dad, a total foodie, is pedantic about good food; the house is stocked better than most restaurants, from vacuum-sealed packs, to multiple woks, to Japanese cooking knives that will last for centuries.  My parents even order food straight from the suppliers to make sure they get restaurant quality produce at home.  My maternal grandmother, the super-cook, lives with my parents.  So, when I go home, not only is the house stocked with tools and a pantry from heaven, but I still have the privilege of eating the food of my grandmother, the wizard.

What are the two dishes your grandmother makes that you crave the most?
She’s great at both Peruvian and Japanese cooking, so I’d choose two dishes from each cuisine. Locro, a hearty Peruvian pumpkin stew, and chupe camarones.  The way she makes that crayfish chowder can’t be surpassed.  As for Japanese food, I love the way she prepares sukiyaki and makes pickles.

How do you take your coffee?
Macchiato, thanks.

You in three words…
Simple, joyful, committed.  I’m all in, and I’ve learned to be both devoted and humble.  It gets you far.

Finally, what do you feel has been your biggest achievement in the last ten years?
That I always have a good time.  I’m amazed.  I get to travel, see the world, meet new people, I get a proper taste of a place, its culture, and I have fun! I keep enjoying myself, that’s the biggest thing for me.  The achievement of doing what I love, and still loving it every step of the way.

Janice is a girl from Lima, Peru who loves a good cebiche and a glass of dry Riesling. She travels the world (often for food or to check out new restaurants) and lives in Australia. Janice tries to learn about different countries through cuisine, and takes advantage of Sydney’s multiculturalism by exploring gastronomy in all of its forms. Grower’s markets, wine tastings, restaurant openings, cooking classes, shopping for specialty spices; she’s keen to do it all.