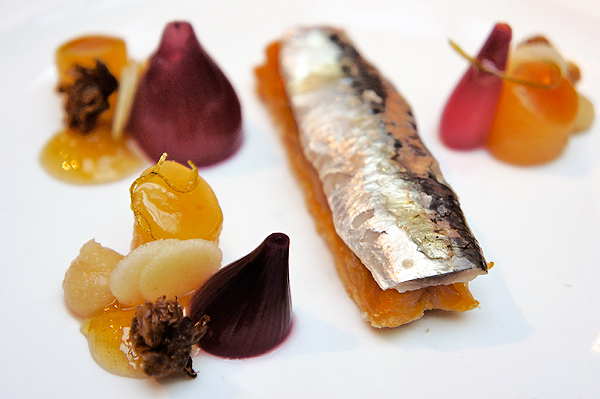 When in Germany, eat French?  Well, that is exactly what I did.  Berlin is not a big city like Paris.  But it has a nice buzz and I always enjoy my visits there.  The history of the city is overwhelming and increasingly, so is the arts, culture and dining scene.

On a recent visit in July, I checked out a restaurant called Facil on the roof-top of the chic and elegant Mandala Hotel in Potsdamer Straße.  A friend had recommended it and I was not at all disappointed.  As it turned out, the restaurant had a “birthday” degustation menu to celebrate its eleventh year of operation. It was a real treat.  Michael Kempf, the chef, may be a true-blue German but his style is built on a solid foundation of French cuisine.  His style is light and he allows the ingredients to speak for themselves.

I started with several rounds of amuse bouches.  The first item on the menu melted my heart because I am a great fan of fresh sardines.  The meal started with a beautiful filet of fresh Breton sardines served on a pastry of shallots.  This dish transported me from Berlin to Bretagne instantly.  The black cod that followed had German and Asian touches, with sauerkraut-like radish and a touch of coriander in a savoury broth.  An interesting blend that worked well with the cod  The seafood was followed by some serious meat that exceeded my expectations.  First, there was saddle of venison on a bed of fennel and pistachio.  Game meat like venison is usually served in autumn but I was happy to be eating it in summer.  It is not easy to get good venison and this was nicely cooked medium-rare.  Unfortunately, I found the fennel to be an odd combination for venison and it did not marry nicely.  The last main course was cheek of bison, served with cabbage and turnips.  The bison cheek was much more flavourful than beef cheek and tasted like savoury molten chocolate.  The meal ended beautifully with several rounds of dessert, a la Française.

For the wine, the sommelier recommended several glasses of German wine to go with our meal. The one that I particularly enjoyed was the Weingut Schnaitmann Lemberger 2010.  It was medium-bodied, and full of berry flavours and a strong hint of spice and cinnamon.  I was extra pleased to try this particular wine as I’d been trying to find the Lemberger in Singapore with little success so far.

Maroj Alliax sleeps better on an airplane than on terra firma. Maroj keeps himself sane during his many business trips by checking out nice restaurants and food places when abroad. In his student days, Maroj worked as a waiter in restaurants and went to cooking school briefly in Paris. He likes to cook for friends but has less time to do that now because of the travelling. He has not given up the idea of running a restaurant one day.