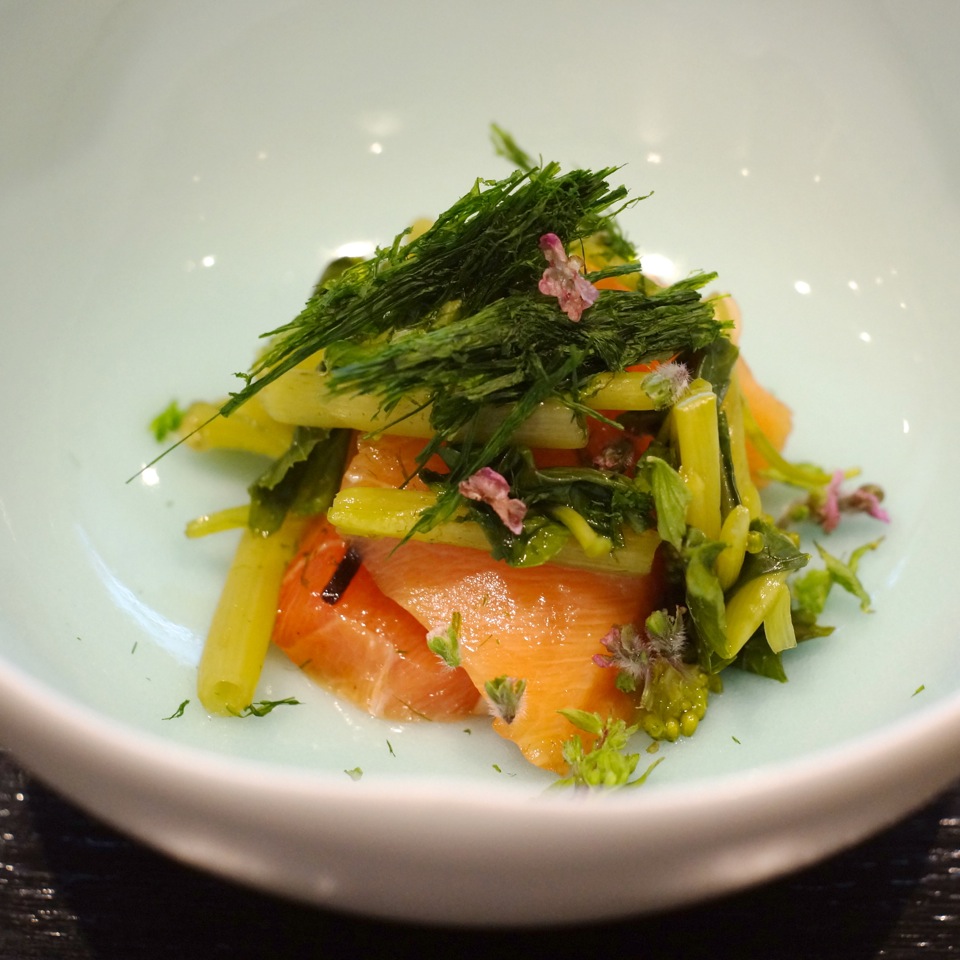 Squinting through the wet, side window of the Miyako Taxi, I could just about see the bamboo clad façade of Jiki Miyasawa as we crawled to a stop. I quickly handed over the correct mix of metal and paper yen and made a beeline for the well-known Kappo restaurant. I was 20 minutes late for my lunch appointment!

Kappo — in direct translation of the kanji characters — means to cut and to cook. It emphasises the personal attention to culinary detail, with the chef being in tune with the seasonality and tastes of the ingredients used. Hence, the chef holds court not unlike a high-end sushi restaurant. Jiki Miyazawa is no exception. Once you slide the bamboo door to the restaurant, the hinoki counter dominates the interior design. We see a few chefs behind the counter sporting clean white tunics and heads topped with a short white cap —the universal Japanese culinary look of ‘we are serious about what we do’.

Red-faced from being late, we offered our profuse apologies and quickly settled down. The first course or sakizuke, came in the form of poached hotaru ika with issunmame. That went down quickly and well with our Kirin beer, with the interplay between the squid ink and milky bean mush creating such delight. After a brief flurry of activity from the hidden inner kitchen, our steaming hot soup was served – it was a milky lily bulb broth and torched amadai (tile fish). Lunch was proving to be an exercise in self-control as I tried not to consume everything in one hungry gulp. The same amount of self-restraint was needed for the artfully plated salmon, asparagus and topped with aonori (green laver) shown above. The contrast between the mellow fish oil smoothness and the playful character of nutrient rich aonori was just delightful. 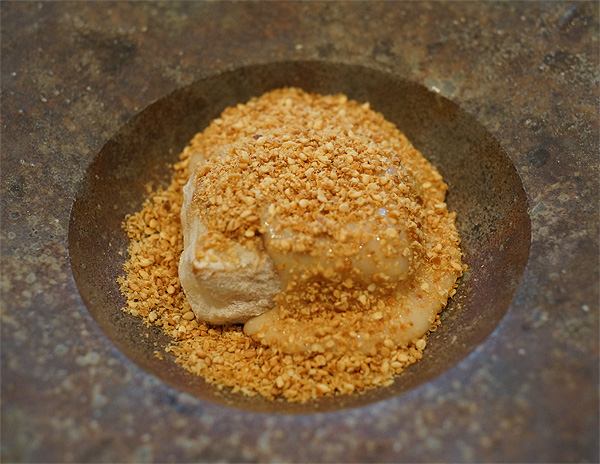 After savouring the subtlety of our appetizers, we began to fully enjoy the ambience of the small 10-seater restaurant. High back chairs, medium soft cushions gave us just the right amount of support to feel comfortable. The soft light from the windows and the warm, incandescent downlights illuminated the restaurant in mix of blue and warm tones. And bathed in that cauldron of light was the chef, Miyazawa-san. He looked no more than 35, which is pretty impressive for being a proprietor in Kyoto’s competitive culinary landscape. After all, it takes 10 to 15 years to master Kappo cuisine. Miyasawa-san was now busy preparing the binchotan (charcoal) for his signature dish, yaki goma tofu (grilled sesame curd – pictured above). With a long pair of bamboo chopsticks in hand, he quickly toasted the square goma tofu blocks and filled the 200-square foot restaurant with the charred scent of sesame.

When the goma tofu curd was perfectly browned, he placed each block into a flat, rust-coloured ceramic bowl with a small dimpled centre and proceeded to pour thick sesame cream (seasoned with honey and salt) and lashings of freshly grated sesame. If only you could smell it now! As the enamel of our pearly whites broke through the thin, slightly powdery skin, it unlocked a creamy centre, not unlike that of an Epoisses de Bourgogne cheese. In place of a strong pungent nose, the mix of the soft goma tofu, grated sesame and the thick sauce of sweet sesame cream delivered a taste so divine, we relished each and every mouthful. The secret of this delicious goma tofu, lies in the blend of kuzu (a natural binding agent), konbu (seaweed) and grated sesame. Ah ha! There’s no soya bean used at all… 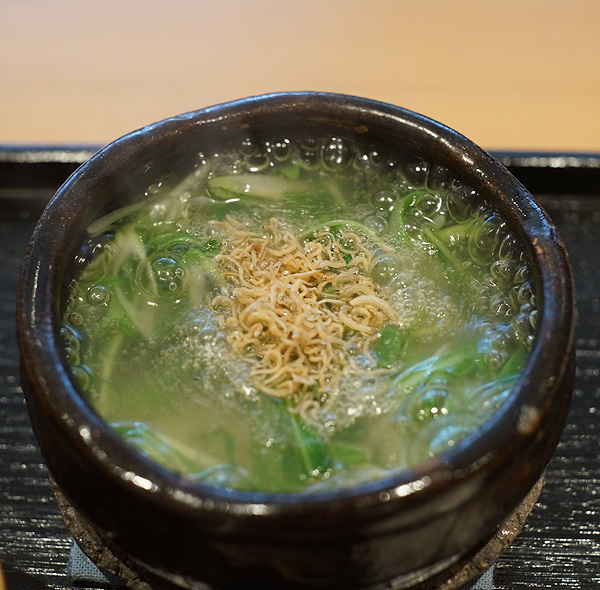 While the goma tofu represented the ‘yama’ (the peak) of our experience, the creations that were to come next were certainly not a steep descent from heaven. The konabe (small hot pot) was a deliciously starchy broth of Kujonegi (soft starchy leek – pictured above) topped with deepfied iwashi fry was pure comfort food. Kujonegi is a native Kyoto produce and there’s even a fable about how the famous Kukai (the great Japanese monk who brought Mahāvairocana Tantra from Tang dynasty China) escaped the jaws of a large snake by hiding in a field of kujunegi. But there’s no hiding our satisfaction with this wonderful concoction of delicate leek flavours . Somehow, kujyonegi has a more rounded taste than let’s say a British leek.

What came next was an exercise in rice appreciation. 3 dollops of rice, each with decreasing levels of moistness, was served separately in a large ceramic bowl. The idea was to akin to pouring Burgundy in a wide body glass so the nose of the occupying content reaches the all important olfactory senses. I could smell how the different levels of moisture affects the flavour of rice, with the wettest version being the sweetest to my nose. After picking up the remnants of the rice granules from the ceramic bowl, we began to ogle at the bowl itself. The antique bowl, with shades of rust and gray, was very thinned walled and displayed a gorgeous patina inside. The combination of Chef Miyazawa’s artful rice preparation and the use of artisan ceramic pieces was perfection indeed. Finally we were asked which rice style we preferred and were each served a fresh bowl filled with our choice. I really enjoyed having it with the jyako chirimen (iwashi fry with sansho spice).

After the rice disgustation, we sampled the season’s best strawberries and oranges, finishing with a sakura-shaped wafer filled with Japanese azuki bean. Phew! What a tour of the season’s finest. I asked if I could have the day’s menu and Chef Miyazawa was kind enough to spend the next five minutes writing it down for me on traditional handmade Japanese paper (washi). When the bill came, we had our next surprise! At only 4480yen a head, it proved that regular consumption of excellent Japanese cuisine does not need the use of prosthetics for greedy souls like me.

Roger’s love affair with food started with a bang. Sent to a distant corner of Kent at 16, an Asian-food starved Roger tried to recreate mom’s stir-fry with explosive results. The loss of the left eyebrow was well worth the reprieve from steak and kidney pie. Today Roger runs his own creative agency as a pretext for his food-based escapades. If you are unlucky enough to be seated next to Roger in a restaurant, do be thankful that he is annoying you with his camera, and not attempting to flambé with a wok.