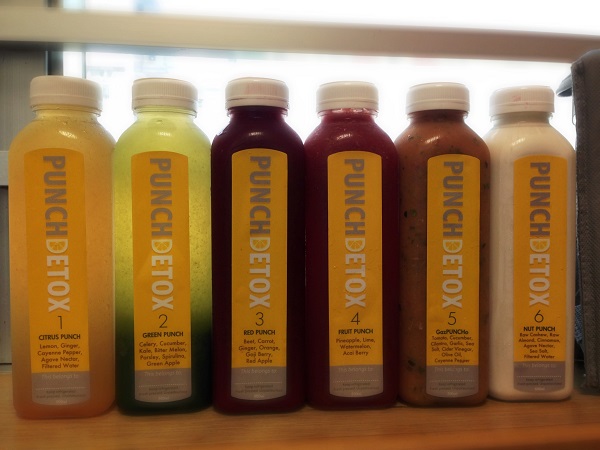 Over the years, I have often heard and read about the benefits of a juice cleanse. All this time, I’ve dismissed it as simply too mar fan (troublesome) – after all, I could just eat healthier or just have fruit and veggies directly for most of the day.

Still, when I heard about the popular 3-day juice cleanse from Punch Detox that’s designed for our busy city lifestyles, I was intrigued.

The benefits of clearing out the toxins of overindulgence sound great – and I definitely overindulge on an ongoing basis – meat aplenty, cakes in abundance, desserts, pasta and lots of thick (white) toast. In fact, I have to force myself to bring a little box of steamed veggies to work almost every day, otherwise I’d never have vegetables since I’d generally avoid ordering them when I go out for meals. Some of the more well-known cleanse benefits include clearer skin and more energy, increased sensitivity in taste buds and a boost to the immune system and – some weight loss. I didn’t need further convincing – while I could fit into all my pre-preggie clothes, being thinner is always an ongoing agenda.

All in all, Punch’s proposition of having prepared-for-you, completely organic and utterly nutritious juices delivered to my doorstep and emerging with a better (inside and hopefully outside) body after three days was definitely appealing.

I planned the cleanse for the week after my weekend holiday in Bangkok (which meant non-stop noshing for 72 hours) – a Tuesday, Wednesday, Thursday cleanse. On Monday, the bottles arrived in three grey cooler bags – one for each day – promptly in the late afternoon. There are six different bottles of juice a day across the three days of the cleanse.

Day 0 – Monday
Punch recommends that you ease into the cleanse with cutting out meat, caffeine and booze a couple of days before. I don’t do alcohol or coffee so that was a breeze, but had to cut down on my several tea lattes and black teas that I usually have over the course of a day. Now, meat – that was going to be harder, so I had to force myself to have a veggie wrap (haloumi, portobello and rocket) at lunch and went home for er… chicken curry (but tried to have only a few pieces…) with lovely crusty bread… white bread….

Day 1 Tuesday
I always have great timing, and thus, it turns out I’d completely forgotten that the first day of my cleanse was a public holiday, and a family day at Lamma island with the kiddo had been planned. Not the best day to kickoff a cleanse considering there would probably be several large meals… but I was committed and feeling determined. Brought the juices along for the day with extra ice packs to ensure their freshness – the cooler bags provided were handy indeed. I was able to easily resist the large lunch complete with dim sum and several snacks over the course of the day that everyone else was happily tucking into – and busied myself with feeding the boy his very healthy home-prepared meals instead.

Strangely, my stomach felt empty-ish, expectedly, but I wasn’t craving any particular foods, although we passed by lots of stalls hawking all manners of snacks. I did find myself very very looking forward to the next juice, and to the next juice – generally 2.5 hours apart.

I did do a permitted “cheat” with fresh coconut juice from a kiosk on the island, and it tasted soooo good.

Long day, and Punch recommends that early sleep is important during the cleanse, so after the kiddo went to bed at 7pm, I called it a night shortly afterwards.

Day 2 Wednesday
Back at work.

Interestingly, by day two, I already found that the day had acquired a bit of a rhythm – I’d wake up, have a cup of warm water with lemon and then start on the first juice on the way to work around half eight in the morning.  I was able to make it from juice to juice quite easily without feeling terribly hungry, with plenty of water and herbal tea in between. I must have had at least ten toilet breaks! which was great as it meant the toxins were hopefully being flushed flushed flushed out.

To distract myself from potential hunger pangs and beckoning food during lunch, I took a stroll across Victoria Park instead of wandering around the many eateries in the vicinity.

Day 2 Thursday
Third and last day! I wasn’t hungry, and didn’t miss food from a hunger perspective. But – I definitely missed eating, and I missed the social-ness of eating. I kept on drinking the juices the same way like the previous two days, with plenty of (warm) water and herbal tea in between.

A rumble or two emitted from my tummy but otherwise, I simply moved from juice to juice and time flew by as I busied with work.

I still tried to go to bed early, and managed to do so before 10pm. Nice.

Day 4 Friday – the day after the cleanse
Yay! The day I get to chew again!

The emails from Punch that arrive regularly in your mailbox with cheery encouragement and details about the benefits you’re experiencing advise that on Day 4, the first day after the cleanse, one should be vegetarian – vegan, really, as dairy shouldn’t be introduced until a couple of days later. So I went to Mana! and picked up the Bliss flat, which I had mid-morning and early afternoon. Had a light dinner of steamed egg and vegetables (no rice), and went to bed feeling virtuous.

How the juices tasted
I found all the juices pretty palatable – if not downright delicious. The Green Punch (Parsley, cucumber, green apple, kale, celery, bitter gourd, spirulina) was the most vegetable based one and I often have beetroot juice straight up so the Red Punch (Beetroot, carrot, red apples, ginger, orange, goji berries) was pretty much familiar. I enjoyed the bits of watermelon pulp in the Fruit Punch (Pineapple, watermelon, lime, acai berry), which was really nicely rounded out by the tartness of the pineapple and lime.

The last two juices were my favourite, and I found myself looking forward (somewhat rather obsessively as you can imagine) all day to them – Gazpuncho (Tomatoes, cucumber, garlic, cilantro, cayenne pepper, sea salt, apple cider vinegar, extra virgin cold-pressed olive oil) was the only savoury juice. It was a chilled tomato soup, chunky and tangy  with bits of lovely cilantro and cucumber that added a nice crunch and I had that from a bowl as Punch suggested.

The last one of the day – Nut Punch (Raw cashews, raw almonds, agave nectar, sea salt, filtered water) was a creamy, nutty one with a deliciously grainy texture that I savoured greedily two hours before bed – hey, even though I was filled with the goodness of juice, it’s definitely not the same as having a full dinner of meat and carbs.

And afterwards
A flatter tummy, new bounce in my step and my skin had a subtle glow to it. It felt great that I made it through the three days without having to constantly yank my heart and mind away from cheese, pasta and meat. And cake.

The main takeaway I experienced is really just being a whole lot more cognizant about what goes into my mouth. I was actively reminded of how much food – the eating and thinking and planning – features obsessively in my everyday life. Very essentially for me, the cleanse made me realise how little it takes to feel, if not full, then no longer hungry. For someone who overeats on an ongoing basis because I’m madly in love with food and eating (and that isn’t going to change), it was an important learning.

I’m now thinking of doing a cleanse on a regular basis; if not a full 3-day one, then at least several days’ worth of replacing at least a meal a day with my favourite Punch juices.

Charmaine considers gluttony the most beautiful sin, and enjoys exemplifying it as she goes about her daily activities. Luckily for her, she currently lives in Hong Kong, the purported greatest city in Asia for everything to do with food (it’s a close fight with Singapore, where she was born and bred). These days she can be found (over)eating, thinking of what and where to eat next, and attempting various recipes in her kitchen.